One of my earliest memories of actually working at Lista’s was when I was 12 years old and I was allowed to walk over to the restaurant after Sunday Mass and help Grandma cook eggplant in the back kitchen at 74 Main Street.

We would set up a work station on one of the two 8-foot butcher block worktables.  On one end of the table was a small deep fryer and next to that we set up a rectangular plastic bin (we called them “fish tubs” because that’s what fish were delivered in) full of Italian seasoned bread crumbs mixed with some flour, and next to that was a big round stainless tub with a blend of beaten eggs and milk.

We would clean and trim a case of 24 eggplant (the big purple ones) and then Grandma would slice them on a deli slicer into 1/2″ rounds — I wasn’t allowed to use the slicer until I was older. I would take the slices by double handfuls and submerge them in the egg-wash. Then Grandma would have me lift each slice out of the egg-wash, press it into the bread crumbs on both sides, and gently lay it in the empty bin in single layers with sheets of waxed paper in between. Once all the eggplant was breaded we would let it sit for about 10 minutes to allow the breading to set up. Then we would fry the breaded eggplant slices in the deep fryer set to 325º F.

Now this is the part of the story that makes it a fun memory for me… Grandma had her own special way to know when the eggplant slices were done cooking.  She would tell me to carefully place the breaded slices into the hot oil (they would float on the surface) and we would recite the “Our Father” prayer — then with a long pair of tongs she would flip the slices over and we would say the “Hail Mary” and then the slices were done! (Who can argue with that method.) Golden brown on both sides, not fully cooked, but tender and ready for final cooking when ordered.

And there were several ways you could order eggplant on the Lista’s menu: Eggplant Parmigiana with a side of Spaghetti, the Eggplant & Ravioli Combination, Baked Stuffed Eggplant (with ricotta cheese filling), a Side order of Eggplant, an Eggplant Parmigiana Sandwich, or the Original Lista Burger (a char-broiled hamburger topped with eggplant, mozzarella, and sauce on a grilled hard roll).  Any way you ordered it Lista’s eggplant was delicious!

Directions:
1.  Preheat oven to 350º F – Cover a rimmed baking sheet with foil (for easier clean up) and spray with cooking spray (if desired).
2.  If desired sprinkle the sliced eggplant with salt and set in a colander for 30 minutes. (This step is not necessary but some believe it makes the eggplant less “bitter.” Actually using a fresh, young, medium sized eggplant should prevent any bitterness.  Also we prefer not to peel the eggplant but you can — it’s personal choice.)
3.  In a medium bowl whisk the eggs and milk together.  In a second larger bowl combine the bread crumbs, flour and Romano cheese.
4.  Dip slices of eggplant in the egg-wash and then press into the bread crumb mixture until both sides are coated — place breaded eggplant on a plate or baking tray in a single layer with wax paper or parchment between layer.  Continue until all eggplant slices are breaded — allow to “rest” about 5-10 minutes before frying.
5.  Heat 1/2″ oil in a large heavy skillet or frying pan over medium-high heat until shimmering.  Gently add breaded eggplant in a single layer and cook, turning over once, until golden brown on both sides — about 3 minutes per side (praying is optional).  Add more oil as needed and continue to cook until all slices are fried.
6.  On foil covered baking sheet, line up slices of eggplant in groups of 4-5 overlapping slices — top with 1/2 cup sauce and a slice of mozzarella. Place pan in preheated oven and bake for 20 minutes until heated through and cheese is slightly brown and bubbly.

There you have it, Lista’s Eggplant Parmigiana.  You can serve the eggplant as is with a nice green salad, or with a side of your favorite pasta and sauce, or on a toasted sub roll for an authentic eggplant parmigiana sandwich.

And another note… as I said earlier, I was about 12 when I learned to cook eggplant with my Grandma. That would have made it 1974 and it so happens that was the year actress Noel Neill (Lois Lane in movies and “The Adventures of Superman” TV series) came to speak at SUNY Brockport and ate at Lista’s.  And what did she eat? Eggplant Parmigiana! You can see below a photo of Dad and Ms. Neill and a note she wrote on the back of a menu, “Mr. Lista, Enjoyed your fabulous eggplant & so nice meeting you — Noel “Lois Lane” Neill”   What a Super endorsement! 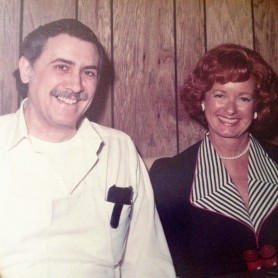 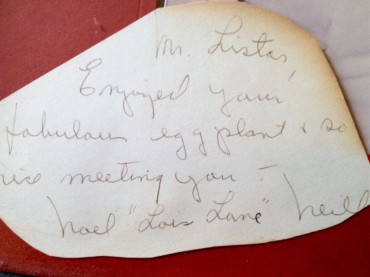 Until next time remember… “The Sauce Makes the Difference!”