On my last post for Lasagna Bolognese I mentioned you could serve lasagna with garlic bread but I didn’t think to give you a recipe.  So here is the Lista’s version of garlic bread.

At Lista’s, like most Italian-American restaurants there was the option of ordering garlic bread from the menu.  This was french bread that was buttered, seasoned, sprinkled with cheese, and placed under the broiler until it was toasty brown and crispy on the edges.  This was sliced and served in a basket, with a meal, or maybe as an appetizer of sorts. Really good dunked in a bowl of steaming Lista’s sauce.

(You are probably wondering why this post is titled “The Original Balboa” when I’m giving you a garlic bread recipe… just keep reading!)

Directions:
1.  Preheat oven’s broiler to 450 degrees F – set oven rack about 6″ from heat source.
2.  Line a broiler pan or baking sheet with foil (easier clean-up)
3.  Cut the bread in half lengthwise and spread cut surfaces with softened butter.
4.  Sprinkle evenly with granulated garlic — then sprinkle evenly with Romano.
5.  Place under preheated broiler until cheese is lightly brown and edges are crispy.
6.  Remove from oven (turn off broiler), transfer the bread to a cutting board, and cut each half into 6 pieces.  Serve with sauce or your favorite meal. 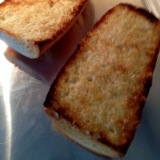 Okay, now that’s done and we can move to the subject of this post: The Original Balboa. Some of you are very familiar with the Balboa sandwich and some are not. The Balboa is a shaved roast beef sandwich with melted Swiss cheese served on toasted garlic bread.

Here locally it has been a featured item on a few menus for many years. Some have actually claimed they ‘invented’ the sandwich — but that’s not exactly true. Lista’s first started serving the Balboa in the early 1970’s after my Grandpa Pat ate one when traveling to Florida. He really liked the sandwich and after returning to Brockport made one for my Dad, Vinnie.  Dad loved it and put it on the menu. At first as a “special” and later as a feature — it was always a very popular item.

I’ve done some research on this sandwich and can’t find much about it’s origin other than it was NOT created in Philadelphia — and was NOT named after a famous fictional boxer. It seems that the earliest accounts of the Balboa come from the Westchester, NY area in the mid 1970’s. In a 2015 New York Times article I read this:

“If a Balboa is shrouded in Swiss (and it is), its origins are shrouded in mystery. Artie Bruno Jr., whose family operated the Larchmont Tavern for more than 50 years – they started the business in 1933 – said, “I don’t know who created it. All I know is a customer – I think my dad said he might have been a cabdriver – came in and asked if we made them. We said, we don’t but what is it? So he told us. I don’t know if we made it exactly how he said or guessed, but we put our own idea together of what it could be.” The Balboa – the name the customer used – made its debut in the mid- to late 1970s, and today is the restaurant’s top-selling sandwich.”  The New York Times 12/18/2015

The Westchester idea sounds right since in that area such sandwiches are referred to as “wedges” and I specifically remember Dad telling me that the Balboa was a wedge sandwich.  There have been several variations of the sandwich out there, many with mozzarella cheese; peppers and onions, or even bacon. Some made with turkey instead of roast beef which is a travesty! Here I give you what I believe is the original recipe or at least what was the original Balboa sandwich we served at Lista’s in the 70’s.

The Original Balboa served at Lista’s

Directions:
1.  Preheat oven’s broiler to 400º F and position rack about 6 inches from heat source.
2.  Cover a rimmed baking sheet with aluminum foil and spray with cooking spray.
3.  Prepare au jus:  Pour beef stock in a medium sauce pan, add Worcestershire, garlic, onion, salt and pepper – bring to a boil and reduce to a simmer.  Keep hot.
4.  Prepare garlic bread: Trim the ends from the French bread (save for another use) and cut into 4 servings – then split each lengthwise and make into garlic bread by spreading each piece with butter, sprinkle with garlic and Romano, place on the baking sheet, and broil until golden brown and crispy on edges about 5 minutes. Remove from oven and set 4 bottom halves aside.  Then lay 2 slices Swiss cheese on 4 top halves and put back under broiler until cheese is melted and bubbly about 3 minutes. Remove from oven and turn off broiler.  Arrange the tops and bottoms together on the baking sheet.
5.  Using tongs, take each portion of roast beef and submerge in the hot au jus for about 30 seconds until warmed through – remove and place immediately on bottom half of sandwich and cover with the top half.  (Note: the Balboa should be a bit “wet” from the au jus)  Slice each sandwich on the diagonal into wedges. Serve with remaining au jus for dipping if desired.

There you have it, The Original Balboa as served at Lista’s.  I hope you take time to make this incredible sandwich.  It really is a delicious combination of flavors and very satisfying.  Let us know what you think. Send a comment or ‘like’ this recipe here.

Until next time remember, “The Sauce Make the Difference!”

One thought on “The Original Balboa”