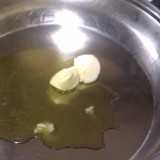 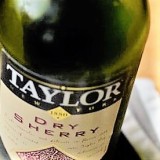 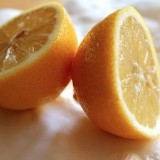 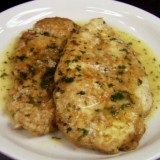 In response to requests from some of my readers, today I’m featuring my own Chicken French recipe. As many of you know, Chicken French is considered a regional dish from the Rochester NY area, and almost every Italian American restaurant in town serves their version of this popular dish. Interestingly, Lista’s never did have it on the menu. Possibly because the dish was relatively new in the mid 70’s and Lista’s closed its doors in 1980.

Since locally this dish is featured in Italian American restaurants, one might think it a traditional Italian dish. But from what I have learned it doesn’t appear in traditional Italian cookbooks or in the restaurants of Italy. Although articles have been written about the roots of the dish, there is still some controversy as to the origin. And it seems that Chicken French may be a dish that was created out of necessity.

In the 1950’s a dish called vitello alla francese — veal prepared in the French style — was being served in some upscale New York City restaurants. Similar to the traditional veal piccata, which is also made with a wine and butter sauce, vitello alla francese was made with the addition of lemon… and was dipped in an egg batter. This dish made its way upstate to the more casual Italian American restaurants and was generally called veal francese or simply veal french. Then in the 1970’s when the consumption of veal was being protested, some clever restaurateurs substituted the benign chicken breast for the controversial veal cutlet and voila — Chicken French was born!

Once Chicken French hit the local menus its popularity grew quickly and people soon found their personal favorite spots to dine on the dish. The recipes varied slightly from chef to chef and generally was determined by the use of the more assertive sherry versus the subtler white wine. And the ratios of wine to lemon to butter seemed to give one place advantage over the next. Although it is truly a matter of personal preference… I happen to like sherry wine and a bit more lemon in mine.

All that being said, I personally had never heard of Chicken French, let alone eaten it, until my Dad began his second career at Brockport College. Where it was, of course, a popular dish at the on-campus restaurant and catered banquets.

The funny thing is, when I first learned to make Chicken French I just assumed it was called that simply because it was made like French Toast dipping the cutlet in egg batter and pan frying it.

A few notes before you use this recipe:

Remember chicken breasts come in all sizes, so if you are using those gigantic breasts from the Family Pack at Wegmans then you may want to butterfly them to make the meat easier to pound…and you need to pound the chicken. You want a thin cutlet so it cooks quickly and evenly, and by pounding the meat you will also break down any connective tissues that may cause the chicken to be tough.

As I mentioned above, I prefer to use a dry sherry wine for my chicken french. (Taylor is a good inexpensive choice for cooking.) Even a bottle of cooking sherry will do in a pinch. But if you happen to have a good dry white wine like a Sauvignon Blanc then by all means use that instead.

Fresh lemon juice is always the best choice — but the bottled stuff works in this recipe. And remember to adjust to your taste (you may want to only add half the lemon at first, taste and add more to suit your palate).

Make extra sauce if you’re serving guests. People like extra sauce, so think ahead and double the sauce ingredients (chicken stock, wine, lemon, butter) and cook some in a separate pan if needed.

Directions:
1. Place chicken breast halves (one at a time) in a large zip top bag and pound with the flat side of meat mallet or other flat heavy object until they are about 1/4 inch thick and even.
2. In a shallow bowl, mix together flour, salt, and pepper. In another bowl, whisk eggs with parsley flakes.
3. Heat 2 TBSP olive oil and 2 TBSP butter in a large skillet over medium heat until the butter melts and begins to foam. Swirl pan to combine oil and butter.
4. Dip each chicken portion into the flour mixture first, then into the egg mixture, and gently lay them into the skillet. Allow room to turn over. Add additional olive oil as needed.
5. Sauté the chicken breasts, turning over once, until golden brown about 3 minutes on each side. Remove from the skillet and set on a large platter or baking pan.
6. In the same skillet over medium-low heat, melt the remaining 2 TBSP butter, stir in the sherry, lemon juice, and 1 cup chicken stock. Bring the sauce to a simmer, dissolving any brown bits from the bottom of the skillet as you stir. Return the chicken breasts to the sauce, and gently simmer until no longer pink in the center, about 15 minutes. Add additional chicken stock as needed.
7. Serve the Chicken French with any remaining sauce spooned over top.

There you have it, Dan’s Chicken French. A classic recipe that is both simple to prepare and elegant to serve. Served with some seasoned rice and a green vegetable (think broccoli, asparagus, or haricots verts) makes this an everyday meal. Presenting on a bed of angel hair pasta or sauteed greens will make it work even for special occasions. So I hope you get the chance to make it for your family or friends sometime soon. And don’t forget you should tweak the flavor by adjusting the amounts of sherry and/or lemon to suit your particular palate.