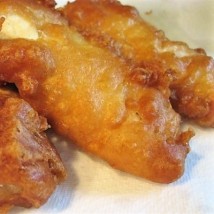 This weekend I joined my wife, her sister, dad and stepmom for a Fish Fry at a local restaurant. As many of you know, Friday Night Fish Fry is a dining trademark in the Rochester NY area. As long as I can remember it was a regular Friday tradition for people all around our community to go to any number of restaurants for this iconic fish dinner. Traditionally served during the Lenten season (the six week period leading up to Easter Sunday) a typical Rochester area Fish Fry consists of a battered or breaded haddock fillet (the bigger the better) served with french fries, coleslaw and tartar sauce. Over the years this classic Friday night menu item has become available any day of the week; and it has made it’s way onto menus of most restaurants, taverns, and grocery stores… even Chinese take out places feature Fish Frys. Today practically any place that has a deep fryer will feature a Fish Fry.

During those few years that I worked for my Dad at Lista’s Italian Cuisine, the Friday Night Fish Fry was truly an anchor to our financial week. From age 16 to 18 I was given the task of fryer cook on Friday nights. It was my job to produce the hundreds of fish frys that left our kitchen. It was a fast paced, greasy, stinky job but I really loved it and I was darn good at it! I can still remember the feeling of looking out the pass-through into the dining room and seeing the throng of people lining up — every table full, people waiting to cash out, people waiting for a table, and a line outside the door and literally down the block just waiting to get in. It felt both thrilling and overwhelming to see all those people and knowing that the greatest number of them would be counting on me to cook their dinners.

We had two large deep fryers at Lista’s — one fryer was used for french fries, veal cutlets and a variety of other non-fish items; while the other was exclusively dedicated to the battered haddock. We would remove the fryer baskets and cook the fish right in the heated vat of vegetable oil. Each portion of fish was hand dipped and laid in the hot oil, allowing it to cook until golden brown and piping hot. Then it was plated with the requisite french fries and coleslaw and passed through to the harried waitstaff. During the busiest hours it was almost impossible to keep up with the demand… and on one occasion I was so intent on keeping up I actually grabbed the fish from the fryer with my bare hand just to get it on the plate!

At Lista’s we featured battered fish frys and used only the finest boneless, skinless, Icelandic haddock fillets. At first we didn’t use beer in our fish batter (since we didn’t serve alcohol) but in the latter years we began to serve beer and wine and so added beer to the batter recipe. We also served a special Grade A, extra long french fry with a cut that was somewhere between a standard 1/4″ x 1/4″ cut and a steak fry. The fries had to be as impressive as the fish itself. Plus our coleslaw and tartar sauce were house made using family recipes that were far superior to the commercially made products that many places used. 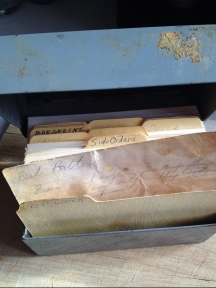 Above is a picture of my Dad’s recipe box and his hand written recipe card for fish batter — can you tell how much it was used? This box is one of my most prized possessions and one of the few remnants of my days working with Dad at Lista’s.

Directions:
1. In a suitable mixing bowl, whisk together the egg and milk until completely combined and frothy.
2. Add in the flour, baking powder, baking soda and salt and whisk until smooth.
3. Allow batter to rest at room temperature 5-10 minutes before using (this give the leavening time to activate and makes the batter crispier).

To fry fish: Start by patting dry the fillet with paper towels, dip the fillet in the batter completely and remove from batter allowing excess batter to drip off into bowl. Gently place the battered fillet into a large pan with approximately 3″ of hot (350 degree F) vegetable oil – about 1 1/2 quarts. Fry fish until golden brown on bottom (about 2-3 minutes) and flip over using tongs — allow to fry on other side until golden brown (another 1-2 minutes). Remove from hot oil with tongs and drain on a plate covered with several layers of paper towel. Keep warm while frying other fish fillets. Serve with french fries and the coleslaw below.

Directions:
1. With a very sharp knife, slice the cabbage as thinly as possible and set in a large mixing bowl (or you can use a slicing attachment on a food processor if desired). Sprinkle cabbage with 1/2 tsp salt and let rest.
2. Grate the carrot on the large holes of a box grater and rinse quickly in a wire strainer under cold water; squeeze out water, and add to cabbage in bowl. (The rinsing is optional but it prevents the coleslaw from turning too orange colored.)
3. Add the parsley flakes, mayo and sugar to the bowl and mix thoroughly until well combined and everything is coated with mayo. Cover and refrigerate at least 15 – 30 minutes until cabbage has released some moisture. Stir coleslaw and season to taste with salt and pepper just before serving. Great with a Fish Fry or other home style meal.

There you have it, Lista’s Fish Batter and Lista’s Coleslaw — just right for your own fish fry. Although we only used haddock at Lista’s you can use any mild white fish for a fish fry. The batter works great for chicken nuggets, onions rings, or other similar foods too.

I hope this post brings back some memories for those of you that were fortunate enough to enjoy a fish fry at Lista’s Italian Cuisine. I would love if you shared your memories in a comment on this blog.