Pot Roast is one of those classic comfort food meals that brings back memories of my childhood. Every year my Mom, Doris, would make pot roast on my birthday (along with the very best sour cream chocolate cake, which I unfortunately misplaced the recipe — but when I find it I will post it). 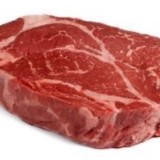 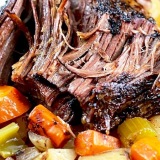 Pot Roast has been a part of the American diet since the mid 1800’s. Commonly known as “Yankee Pot Roast” in the Northeast, it was first made by those early American immigrants as a variation of the French dish boeuf a la mode (beef in the style) with influences of the German dish sauerbraten (sour beef). Both of these traditional European recipes call for a tough cut of meat (usually beef) that is slow cooked (braised) in liquid for hours to create a fork tender flavorful roast accompanied by a savory au jus or gravy. Sauerbraten is also marinated from 3-10 days in an acidic brine of vinegar, wine, and herbs before cooking — thus the name.

The idea of using the tougher cuts of meat from a working animal’s shoulder or hip made sense in an economy that was struggling in those early years. Enhancing the dish with common root vegetables for added flavor and substance is just plain old Yankee ingenuity.

The most common cut of beef used today for a Pot Roast comes from the chuck (shoulder) and is sold as the 7-bone roast (due to the shape of the bone resembling a number seven) or boneless chuck roast. Equally as popular is a top or bottom round roast (from the hip). The chuck roast tends to have more fat marbling than the round roast and is therefore moister after the long cooking process. In traditional European cooking a round roast would have been lardoned which is the introduction of fat (usually pork fat) into the meat using a long hollow larding “needle.” This allows the leaner cut to retain more moisture and therefore be more palatable.

In American cooking, the readily available root vegetables such as carrots, onions, celery, parsnips, turnips, rutabaga, etc. are usually added to the pot for flavor along with herbs such as parsley, thyme or bay. Often potatoes are included to create a one-dish meal.

My Mom typically made her Pot Roast in the oven* using the 7-bone chuck roast, carrots, celery, onions, and parsnips (which I love, but my wife hates). Usually Mom would add potatoes to the pot or sometimes serve the roast with mashed potatoes on the side. Unlike a stew, Mom typically didn’t thicken the pan juices into a gravy but would serve the au jus on the side so we could add it as we desired.

Of course for me, who loves all things mixed together, I would spend lots of time mashing everything on my plate with a fork and stirring it together before eating it. I also liked to add butter to the mix, and top it off with lots of salt and pepper.

*For this post I am using a slow cooker method because it makes more sense to our busy lifestyles. But you can use your oven or stove top if you prefer.

Directions:
1. Remove roast from packaging and pat dry with paper towels. Season generously on both sides with salt and pepper.
2. Heat a large heavy skillet over med-high heat and brown the roast for about 3 minutes per side. Remove pan from heat and allow roast to rest while preparing the vegetables.
3. Peel, trim and cut vegetables as noted. If using potatoes toss with a little olive oil to prevent the cut sides from oxidizing.
4. Spray the inside of the slow cooker crock with cooking spray. Add the cut carrots, celery, onions and potatoes. Place bay leaves on top of vegetables, and then lay the browned roast on top.
5. Use 1 cup of the broth to deglaze the skillet and pour the liquid along with remaining broth over the roast.
6. Cover slow cooker and cook for 5-6 hours on high or 8-10 hours on low until meat and vegetables are fork tender.
7. Using tongs remove roast to a serving platter (slice against grain if needed) and arrange the vegetables around it. Cover with foil to keep warm. Meanwhile strain the cooking liquid through a mesh strainer and serve as au jus with the roast and vegetables.

There you have it, Mom’s Classic Pot Roast (slow cooker method). Feel free to use which ever root vegetables you prefer — we often substitute rutabaga for the potatoes.

If you prefer gravy over au jus then bring 3 cups strained cooking liquid to a simmer over med-high heat — make a slurry of 3 TBSP flour whisked into 3 TBSP cold water — while whisking hot broth constantly slowly drizzle in slurry until it begins to thicken — then cook for a couple more minutes and serve.